I was at a graduation party this past weekend and ran into a good  high school friend of ours – Mark aka “Wooley”.  The recreational area where the party was held had a really nice red accent wall and Mark said he was thinking about using that shade in his master bedroom. He asked what my opinion was and since I shamefully had not been to see his new home (which he has had for a year!) I offered to stop by on Sunday and take a look.  I should add that I’ve heard Sunday’s in the summer at Mark’s include cocktails poolside, so it was not a hard sell!
Although I loved the red that he was considering, I felt that it blended too well with his furniture and suggested that he went with something that enhancedthe wood, rather than compete with it. His furniture consisted of a rich cherry sled style bed, large armoire and dresser. Additionally, he had splurged and purchased a really beautiful deep chocolate Hotel Collection bedding set that had a tailored black stripe as accent … nice job Mark 🙂
As I thumbed through a paint deck, my initial thought was to go with a blue/chocolate scheme, but Mark is a  bachelor and I was afraid the blue would go more feminine than masculine. I also should add that he is a bit obsessed with golf and once I saw the green, it  just seemed like a natural choice! I chose Sherwin Williams Rural Green and created the inspirational board pictured above. He also has the option of adding a little splash of orange down the line, which I think he would like as well.
The inspiration board is about clean lines, fresh accents and a peacefull elements for relaxing and romance – Mark should like that last one! What do you think?
Oh, and typically, I would list where everything is from, but that’s easy today…it’s all from Z-Gallery. Hmmm…do you think I like that store? And best of all there’s a 20% off accessories sale going on right now – gotta love that! 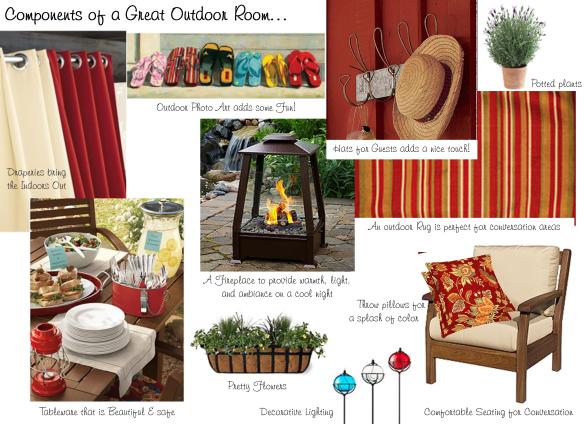 Note: You can double click the photo to see it larger. 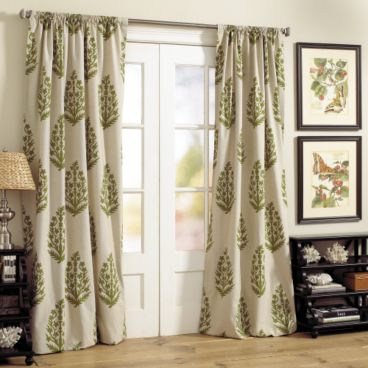 Design Question from Lisa: I am redoing my condo that I bought to update it. I have a very large sliding glass door but don’t want to put up just blinds, I would like to do something different and have searched everywhere for ideas and can’t find anything but blinds and more blinds. Please help…..

Lisa, there are a couple of alternatives you can explore. One is to treat it as a window and put a pair of panel draperies on either side. It will soften the room, provide a way to bring in some pattern and texture, and can be pulled together for privacy and energy savings. Here’s a couple of photo’s I found, most of the doors are french doors as opposed to sliding, but it will work for either, just make sure that when you hang the rod, you leave enough room to the left and right of the door frame to stack the open draperies for easy access in and out. 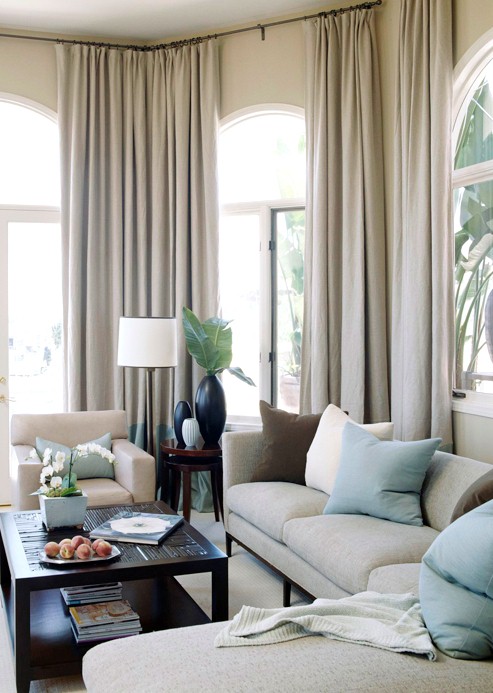 Another alternative is a cross between a blind and drapery. Hunter Douglas has a brand called Silhouette which is a design that combines a vertical or horizontal blind with a sheer fabric. It’s actually quite beautiful and gives offers more options than simple draperies  or blinds which are either opened or closed. It’s not for everyone, but it’s a great option to have. Here’s some photo’s… 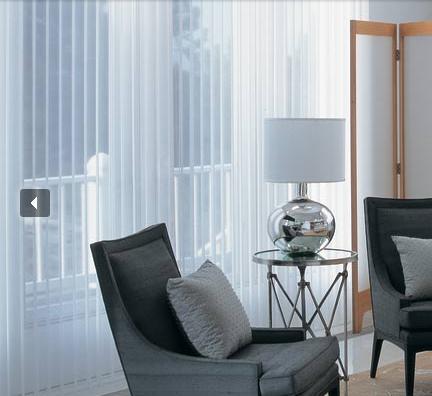 A combination of verticals and sheer drapery

I hope that helps…I’d love to hear what you decide to go with!